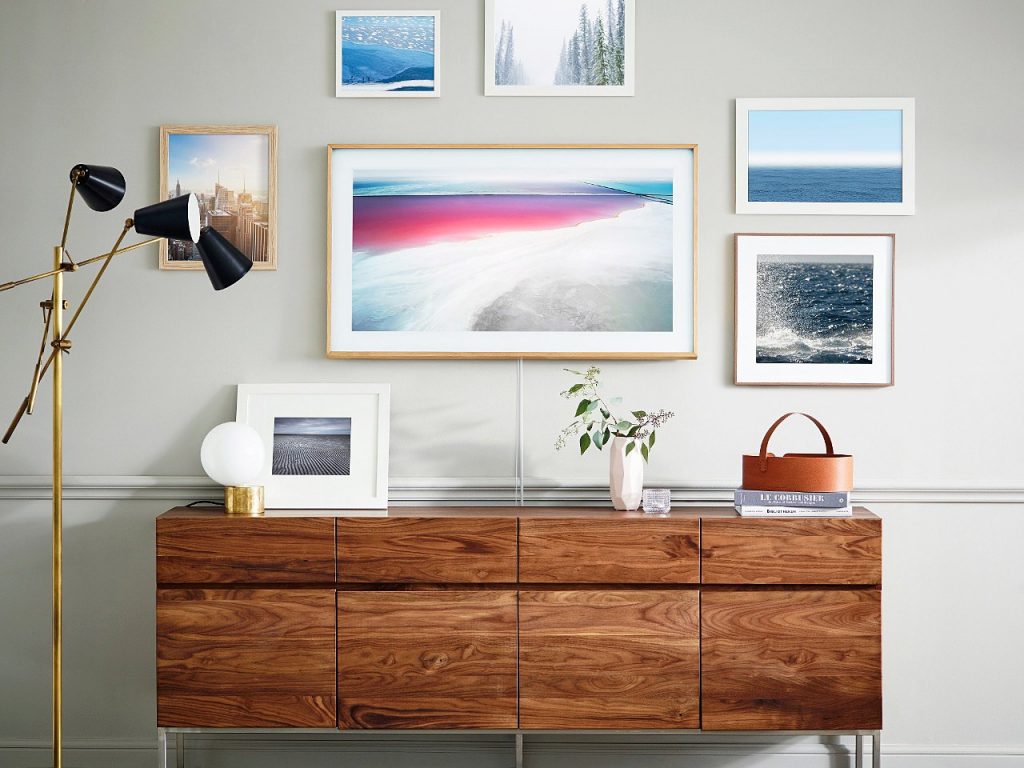 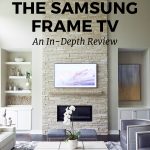 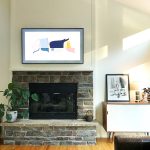 This Samsung Frame TV  review is honest and unsponsored. We paid full price for our television on Amazon. However, this post does contain affiliate links, which means I may make a small commission if you purchase something after clicking on one of them.

When we moved into our new house this summer, we needed to purchase a TV for our living room because we left our previous television behind at our old house as part of the purchase agreement with the new owners. I had seen the Samsung Frame TV floating around the blogosphere and thought it was the perfect solution for us.

The best spot for the TV in our new living room is over the fireplace. But, as a designer, I hate the look of the television over the fireplace or as the main focal point of a room. I also don’t watch a lot of TV on my own – almost never, in fact – and I didn’t want to stare at a black screen all day while home with the baby.

Not being a big TV watcher, I don’t care a whole lot about technology but I do care about aesthetics. Keegan is the exact opposite. The Frame appeared to be a great solution for both of us in that it looks awesome but has all of the latest technology packed inside.

When reading a lot of the blogger reviews on the frame, I noticed they talked a whole lot about how fabulous the TV looks, but they don’t mention very much about how it works. How it works is very important, and there are some particulars you need to know before you invest in this pricey and trendy piece of technology.

The Frame is perfectly rectangular with crisp corners and a minimal frame that comes in three interchangeable colors – black, white, and wood. It also boasts a super sleek, no gap, wall mounting bracket that allows the TV to sit flush on the wall. If you’ve hung a TV in the past ten years, you know that this huge. Usually, there is some sort of gap, which drives me crazy. 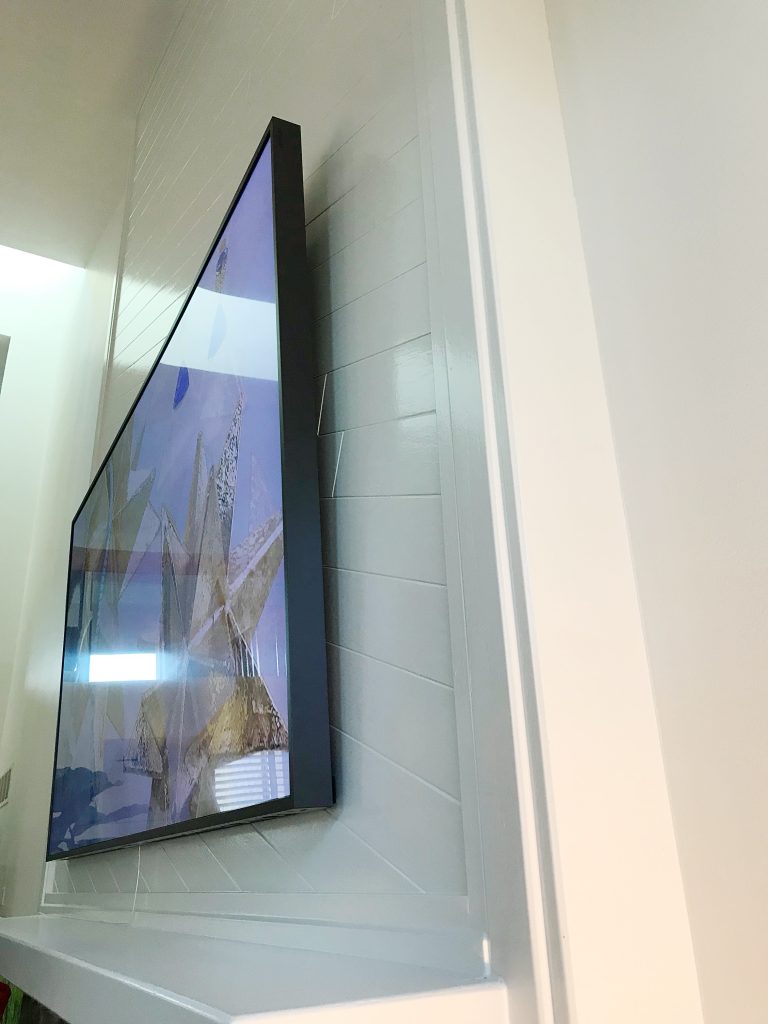 In this photo, you can see that there’s more of a gap at the top than at the bottom. The bracket allows you to tilt the television forward slightly, which we opted to do given the mounting height. 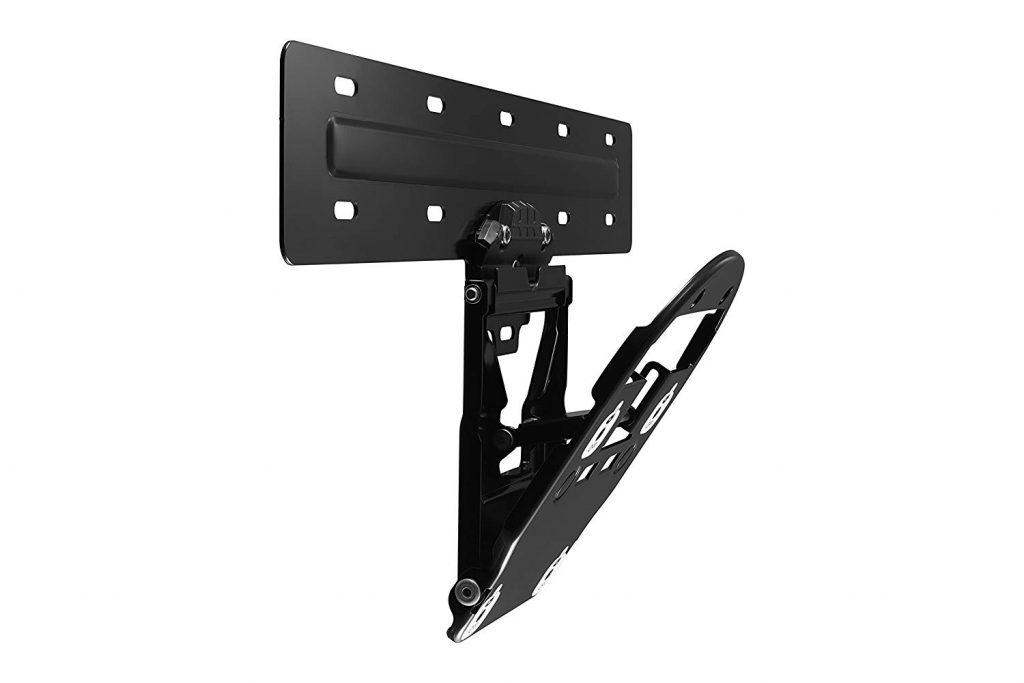 Our electricians hung the television for us, and this was their first experience with this bracket and particular television. They grumbled at first because the fit is very tight. It definitely requires two people to hang the television and finagle the connections while doing so. But, in the end, they had to admit that the design was very slick.

The Box and Connection

The new Samsung televisions come with a sleek box and almost invisible clear cord, which means there are no unsightly wires running between the television and its peripherals. For cord cutters like us, the advantage is that the box has connection for an HD antenna, which means you don’t have to run CoAx cable to the TV. 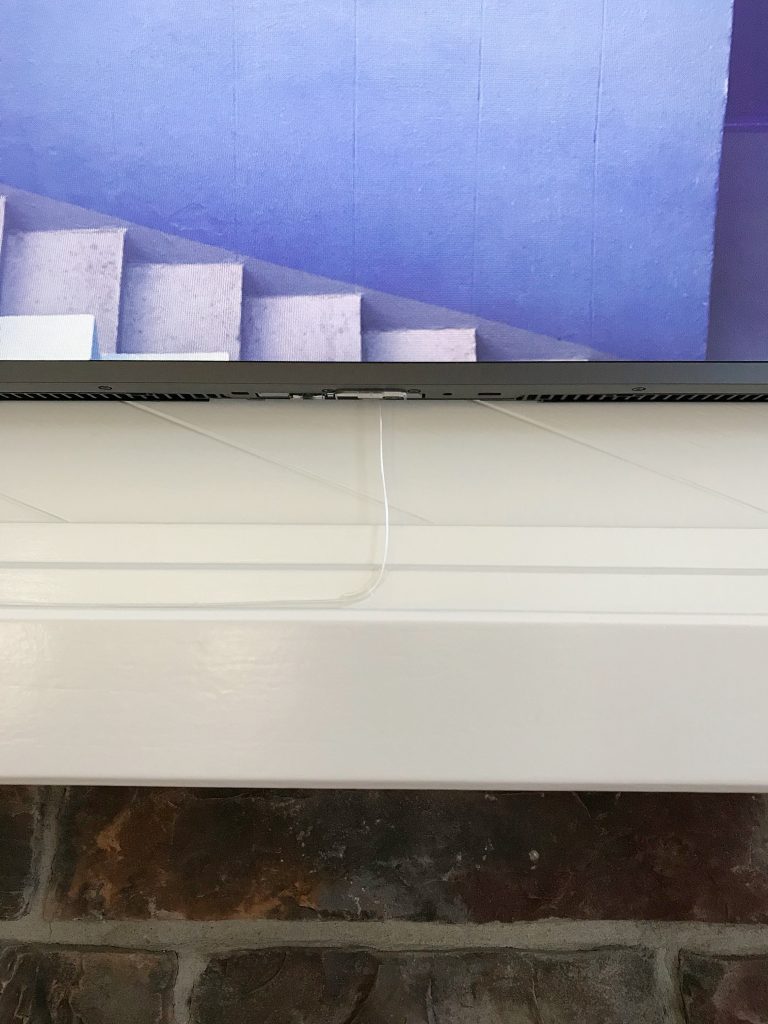 That little white cord is the only connection between the TV and the box. It’s clear/white and nearly invisible. We thought about having it run through the wall and may still do that at some point, but we had just painted and didn’t want to tear up the drywall.

The television comes with a 15′ cord. If you need yours to travel a longer distance, Samsung has a 50′ cord available that you can purchase separately. 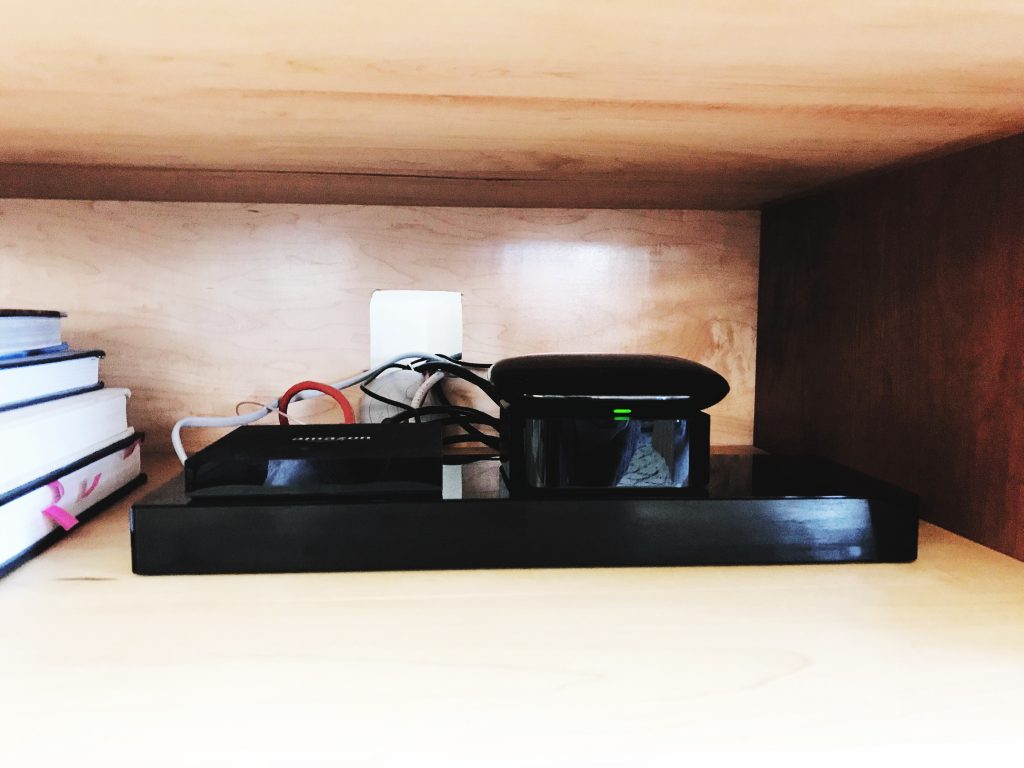 This photo shows the box (bottom) with our AppleTV, Amazon Fire, and universal remote receiver. We now have this little stack of boxes and our receiver, so it all takes up much less space than our previous set up.

The box itself is very minimal and thin with no lights or buttons on the face. The salesperson at Best Buy explained to me that the idea is to store all of the firmware for the TV on the box so that if there is a major upgrade in a few years, you will only have to buy a new box and not a new TV. If this turns out to be true, that will be pretty amazing, because I’m pretty sure this is the last TV we’re ever going to buy. An exaggeration but this thing wasn’t cheap, so it better last!

Setting Up The Samsung Fame TV

I set up the Frame myself after the electricians took off. We installed it several months ago, so I don’t remember all the details, but it took around five minutes, and I had no issues with it at all. The TV walks you through the process, and you use the remote that comes with it to control everything.

The Samsung Frame remote control is small, minimal, and white. The white finish is nice because it’s easy to distinguish from our other remote controls. FYI, we no longer use the Samsung remote except for Art mode. We use the Harmony remote instead…more on that later (link to newest version). 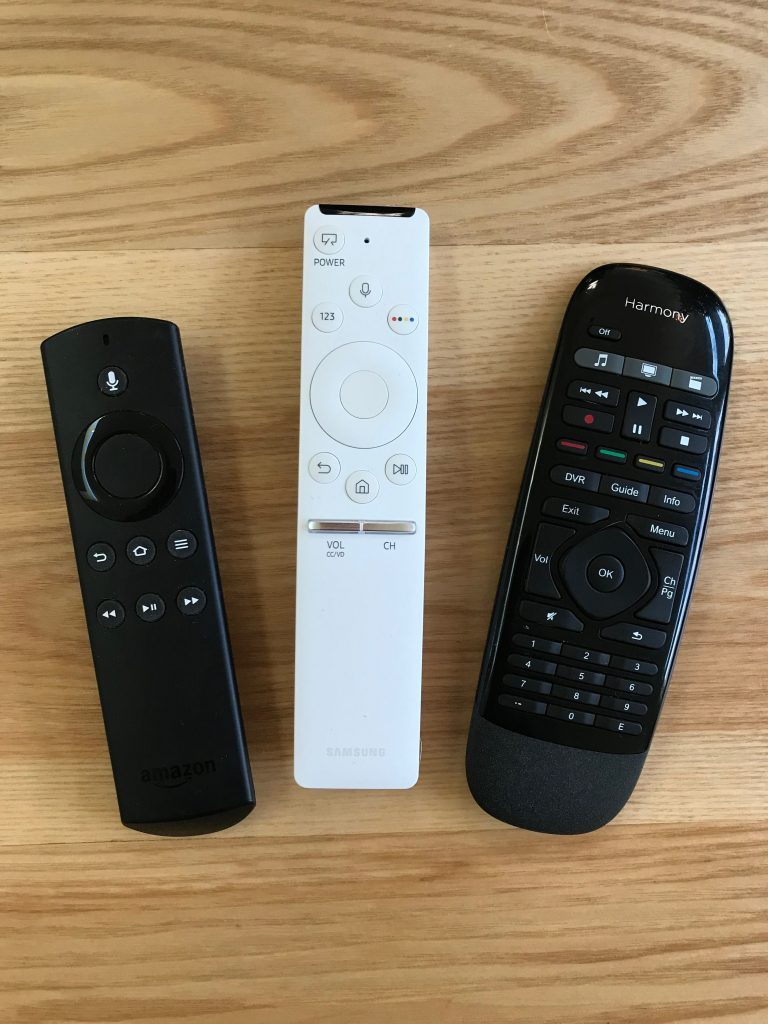 The power button at the top switches between the TV mode and the art mode. Volume and channel at the bottom are pretty self-explanatory.

The remote is programmable, but we didn’t get a chance to full customize it before we decided to switch to our universal remote. The 123 button is used for inputting numbers for channels. The button with the colored dots can be programmed for certain repeat functions. You can also control the TV by voice command, which can come in handy. 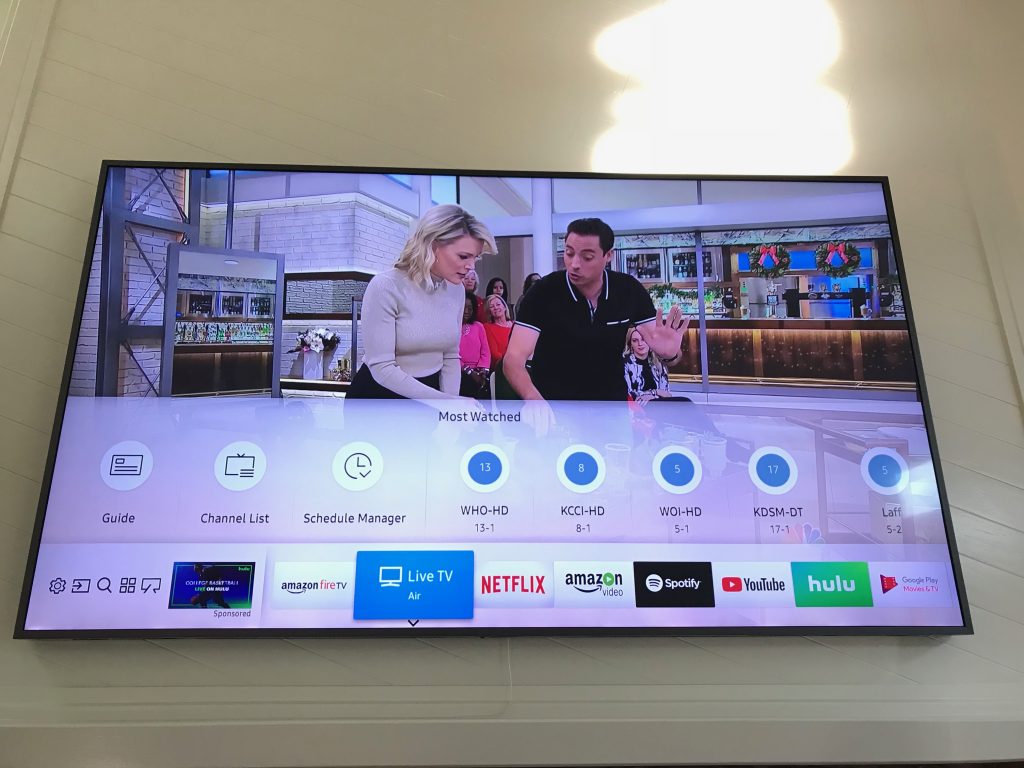 The Samsung Frame has a Smart TV interface that allows you to download apps like Netflix, Hulu, Amazon Video, etc. The Home button calls up the menu of apps at the bottom of the screen, and you use the wheel to scroll through them. The center button on the wheel is the Select/OK button.

The sources are where the interface broke down for us. We were easily able to add all of our sources and had no issue with selecting Live TV from the list of apps on the Home screen. You can also see an option for Amazon Fire in the photo above but no option for Apple TV. They worked at first but eventually got confused. We would select Amazon and the Apple TV menu would come up. Sometimes Amazon would be frozen, and I would have to reboot the box multiple times for it to work. Then one day Amazon Fire got stuck on the screen saver, and nothing we could think of seemed to fix it.

Finally, we switched to the Harmony remote, which we had used with our previous TV.  We use the programmable buttons on the remote to select the source vs. the Smart TV interface, and everything has worked fine ever since. To be fair, this issue is with the box which comes with all of the new Samsung Smart TVs and is probably not specific to the Frame.

Finally, we get to the good stuff. I never thought I would be convincing Keegan to pay $2800 for a television, especially now that you can get a perfectly nice one for under $1000, and neither did he. However, for someone who doesn’t watch a lot of TV – I don’t usually turn it on at all until Keegan gets home for the day – married to someone who enjoys sports, shows, and movies as a way to unwind on a daily basis, the Samsung Frame is the perfect solution because, unlike TVs that stream slideshows while they are on but inactive, it displays static artwork when it is actually off.

The Frame comes loaded with several galleries of artwork, with more available for purchase, in various categories. They include both photographic and non-photographic high-quality imagery such as action, landscape, architecture, still-life, and pattern. Keegan likes many of the landscapes, while I am particularly fond of the abstracts, still lifes, and patterns. In general, the included art leans towards a more modern design aesthetic. You can see the available artwork on Samsung’s website.

You can also upload your own photographs or digital art and add mats to them in several different layout formats. We haven’t played with this too much yet, though I did upload some digital art I purchased online.

The available settings allow you to configure the screen brightness, color temperature (cool to warm), sleep timer, night mode, motion detector, and sound mirroring. The settings for brightness and temperature can be used to make the art appear more “art-like” and less like a glowing LED screen. The appropriate values will vary according to the amount and quality of light in your space 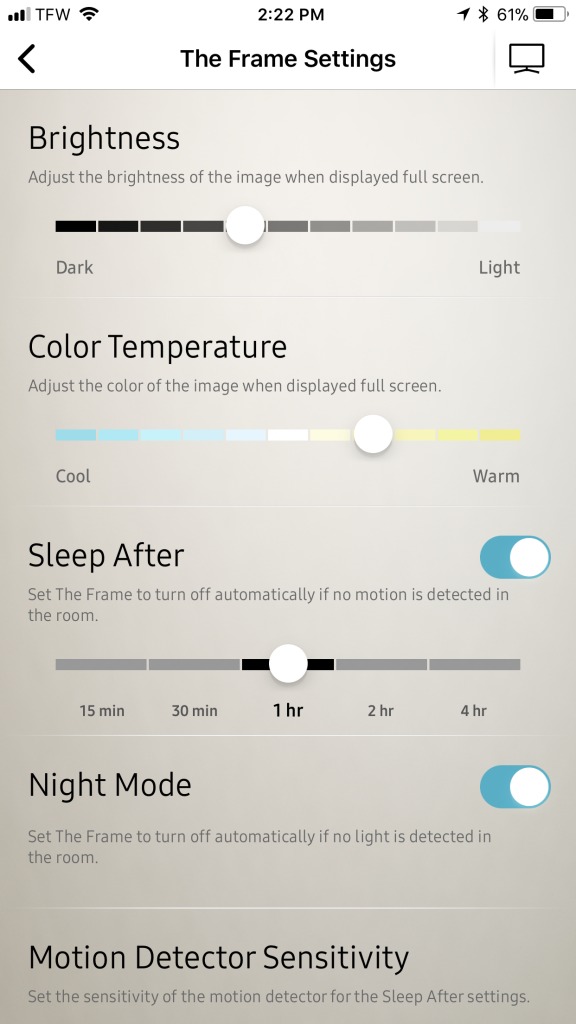 Our living room is quite bright during the day with a northern exposure, so I have my settings slightly towards the dark side and slightly warmer. I think the temperature setting could also depend on your paint color. My walls are painted Benjamin Moore White Dove, which is a warmer white with a touch of gray. The cooler setting for the screen looks very blue with White Dove behind it.

I think one big improvement Samsung could make for the art mode settings would be to have a default setting for day vs. night, triggered by the sunset or a user-defined time, much like the night-mode on the iPhone. The current Night setting allows you enable the TV to turn off the image (black screen) automatically if no other lights are sensed in the room. Since I’m often up all night with the baby, I’ve had more opportunities to observe this setting in action. The Christmas tree lights will keep the screen on, otherwise, it generally turns off.

Does the Samsung Frame TV Actually Look Like Art? 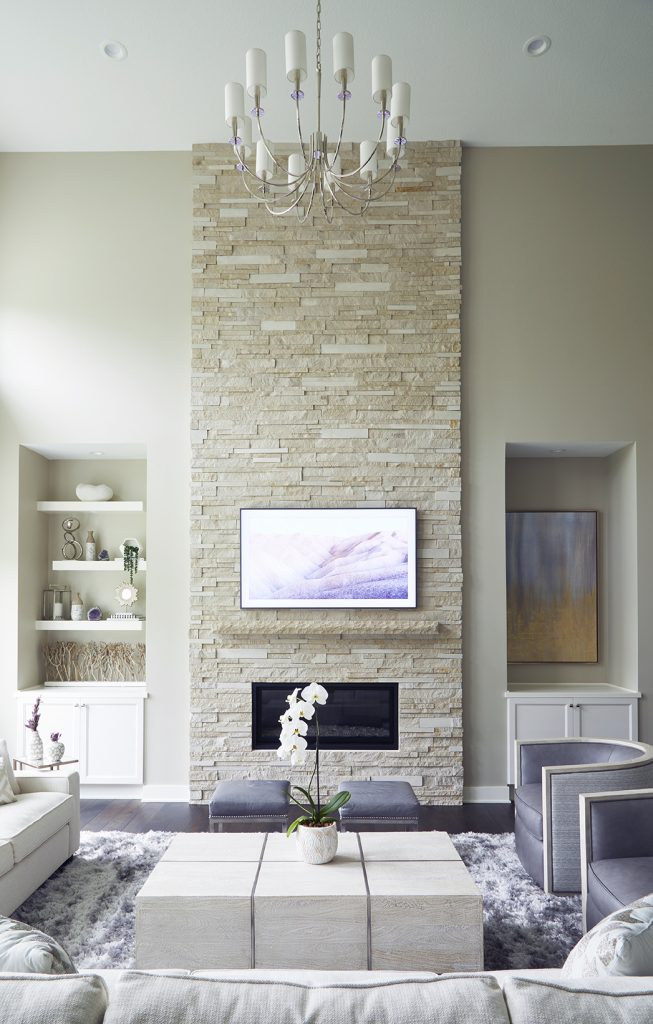 Yes and no, but if it doesn’t look like actual art, it comes pretty darn close. Here is the truth no other (sponsored) blogger is writing: the tv doesn’t look like the marketing photos in real life. It is absolutely discernible from other pieces of art in a gallery wall. It obviously has light to it and a faint glow that is definitely perceptible. Does that outweigh the positives? Absolutely not! We observed it fooling several of our visitors who weren’t aware that it was a television.

Is the Samsung Frame TV worth the price?

As an interior designer who values aesthetics and constantly struggles with the television as the focal point in a room, the answer is an unequivocal yes. The positives definitively outweigh the negatives, which are small and picky, and justify the somewhat outrageous price tag (a 65″ model with similar specs is $1000 less). I will be strongly recommending the Frame to all of my clients who want a large television in their primary living space.

Personally, I know it was a huge splurge, and I am thrilled with it and get a lot of pleasure from the art on a daily basis. It’s one of those purchases that just makes me happy. 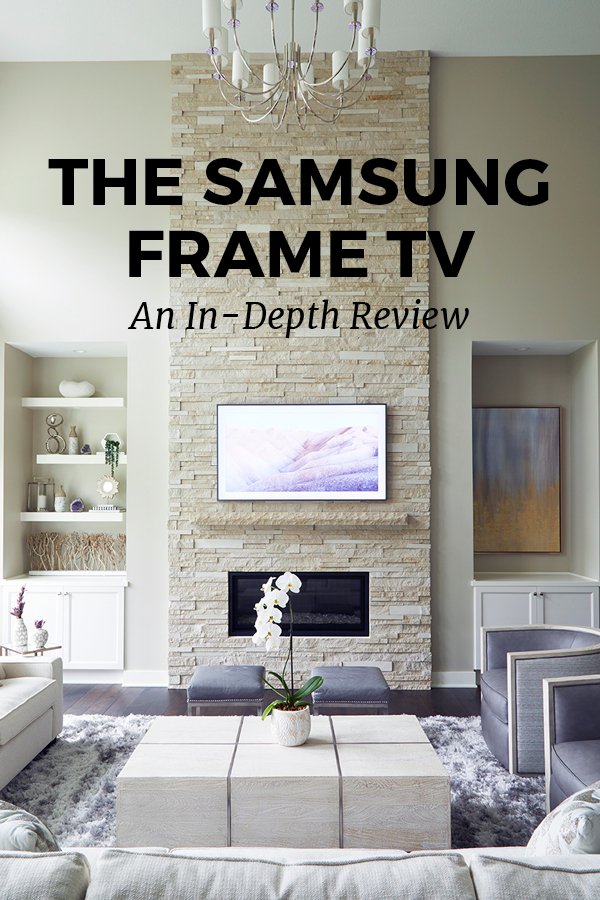